Rabbi Shlomo Yitzchaki (1040-1105), known by the acronym Rashi, is arguably the most famous biblical commentator in Jewish history.  His writings on the five books of Moses are studied by Jewish children around the world, and many of his explanations of the torah have become the mainstream interpretation of the text within Orthodox Judaism.

Rashi’s  first comment on the torah involves an ancient Jewish teaching found in the midrashim:

Rabbi Yitzchak said: It would have only been necessary for God to begin the torah with the words, “This month shall be for you,” (Exodus 12:1), because this is the first commandment that Israel was commanded.

So why does the bible begins with the book of Genesis? Because God wanted to convey the idea that, “The power of His actions He told to His people, in order to give them the inheritance of the nations (Psalms 111:6).” So that if the nations of the world ever accuse the Jewish people, “You are thieves for you conquered the lands of the seven nations (who dwelt in Canaan),” Israel can reply to them, “The entire world belongs to the Holy One blessed is He. He created it and gave it to the one whom He found proper in His eyes. By His will He gave it to them (the seven nations), and by His will He took it from them, and gave it to us.”

In the text of the Torah, and in the entire ancient historical record, we do not ever find the nations of the world accusing the Jewish people of stealing the land of Israel from the Canaanites. The Assyrians, Babylonians, Persians, Greeks, Romans, and many other peoples never complained that the Jews somehow stole the land from these long gone Canaanite nations. So why were these ancient midrashim given over and preserved throughout the generations, and why did Rashi deem it so important as to begin his entire biblical commentary with it?

Amazingly, it is only in today’s day and age that we see the relevance and necessity of this teaching. Since the state of Israel declared its independence in May of 1948, the nations of the world have been accusing the Jewish people of having stolen the land of Israel. They ignore the fact that the Jews accepted the 1947 British Partition Plan which divided the land into two states, one for the Jewish people and one for the Arabs. They also seem to forget that the Arabs chose to reject this arrangement, opting for war instead of coexistence. The very next day after Israel declared its independence, the combined forces of Egypt, Jordan, Syria, Lebanon, and Iraq invaded Israel, announcing their intention to commit a second holocaust against the entire Jewish population in the land.

After the Jews miraculously won this war, they could not just return the land to their enemies who had just attempted a genocide against them. So they kept the land they had conquered, in part because they needed to possess borders that were as defensible as possible in case of future attack. The same scenario played out in 1967 during the Six Day War when Israel once again was threatened with a war of annihilation by its neighbors, only to be granted a second miraculous victory.

Yet despite Israel’s deep historical roots to the land, and its very real security concerns, the Jewish state has been accused by nations from all over the world of having stolen the land of Israel. Israel’s enemies have used diplomatic maneuvering–particularly in the UN–as well as threats of military force and attempted large scale boycotts, hoping to pressure Israel into giving up more and more land. The usual claim is that certain areas of land should not belong to Israel and that giving those territories away will somehow bring peace. However for many of Israel’s foes, the true goal is the eventual destruction of the entire Jewish state.

In the past, Israel has followed the counsel of so-called international experts who advised trading land for worthless promises of peace in the hope this would somehow stop terrorism and help bring an end to the conflict. Israel followed this advice in the Spring of 2000, when it withdrew from southern Lebanon. Soon afterward, the terrorist group Hezbollah immediately seized this newly evacuated area. Hezbollah began launching rockets into Israel and committing cross-border terrorist attacks that killed dozens of Israelis. Hezbollah also built up an immense arsenal of rockets and missiles aimed at the Jewish state. This all finally led to the 2006 Lebanon war which claimed the lives of 165 Israelis and wounded over 2,500 others.

Nonetheless in 2005 Israel once again followed the international community’s calls and again withdrew, this time from the Gaza Strip. The terrorist group Hamas quickly overthrew the forces of President Mahmoud Abbas’ Palestinian Authority in the Strip and took over the entire area. Hamas fired over 11,000 rockets at Israel during the subsequent years, devastating Israeli cities close to the border and destroying the lives of the men, women, and children living there. 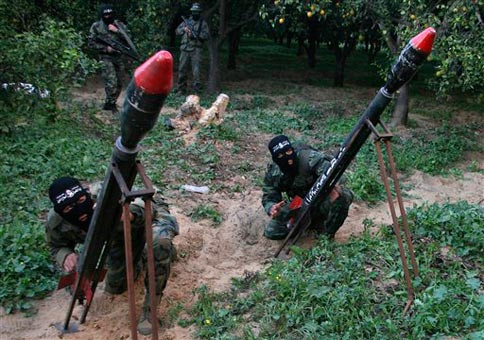 Hamas also built large networks of tunnels into Israel which it utilized to attack and kill Israelis. Israel was finally compelled to respond to this continuous onslaught with two separate wars, first in 2008 with Operation Cast Lead and then in 2014 with Operation Protective Edge. Inevitably, Israel was hypocritically criticized and vilified by countries from around the world for simply trying to defend its citizens.

Even today there is still international pressure on Israel to withdraw completely from the West Bank. However it has become abundantly clear that doing so would allow Hamas to easily overthrow the Palestinian Authority once again. The entire debacle of Gaza would replay itself, only this time in an area that is forty times the size of Gaza.

Equally shocking is the European Union’s boycott of products produced in the Golan Heights territory which Israel conquered in battles with Syrian forces during the Six Day War. If this boycott is meant to force Israel to give up the Golan Heights, who does the EU they expect Israel to give this land to?  To the butcher Bashar Assad, who is responsible for killing and gassing tens of thousands of his own people? Or to ISIS or Al-Nusra perhaps? The fact that this idea has even been raised exposes the true agenda of Israel’s antagonists–attack Israel whenever and wherever possible.

Over the last seventy years, Rashi’s words have proven themselves to be true. This is especially so, given that no other people on earth today are accused of stealing their entire country.  The nations of the world may try to criticize and condemn Israel, but their words are empty. Any attempts to give up territory will only encourage terrorism and lead to more bloodshed. History has demonstrated that stability and quiet are achieved when the people of Israel and their leaders have acted with confidence and unwavering conviction that the land of Israel belongs to the Jews. God Himself has given it to them, and it will forever be the homeland of the Jewish people.